In a span of 7 days, the world of motorsport has lost two of its brightest and most promising talents.

As fans, we all try not to think about the danger that is inherent to the sport, but when tragedies like these occur, we are confronted with the cold, hard reality of our own mortality.

Rest in peace, Messrs. Dan Wheldon and Marco Simoncelli. Thank you for the great racing memories.

There once was a racer called Kimster
Who’s famous for track moves so gangster
In Williams HQ he went around
And now F1 comeback rumours abound
Is this for real or a work of a prankster?

Are you channeling Mr. Burns, Kimi? So what's the evil plan?

“Sisu means big balls! It’s like saying no matter how many times you fall down you will keep getting up.” – Mikko Hirvonen (pre-WRC Rally Finland 2011)

Either way, thank you very much for that mental image, Mikko.

I can almost hear the Imperial March playing in the background...

Kimi Raikkonen went from Formula One to WRC, and now he’s also venturing into…NASCAR. Yes, that American racing series. He must have a case of Racing ADHD, no?

Anyway, notice how well Kimi is channeling Star Wars’ Darth Vader in his sleek, all-black racing gear–is that mere coincidence or is he somehow trying to convey a more badass image to his new American audience?

Either way, I’m liking this look (even if I’m not fully convinced of this dubious racing series move). Darth Kimi suits him well and he actually has that signature deep, robotic voice down pat already.

Now, if someone can just make him hold a red light saber…

There once was a Finn named Kimster,
Who went from F1 to WRC driver
Now NASCAR is where he wants to be,
Is that a case of Racing ADHD?
Whatever, for sure he’s always a winner.

The old saying “If you can’t beat them, join them” would not have survived years and years of seemingly endless repetition if it was not true, and in the case of men, football and wheels, the truth it holds should be multiplied over a million times. And then exponentially increased until mathematics and physics cannot quantify it anymore.

Men have long enjoyed a tumultuous, but ultimately pleasurable, love affair with football and motorsport. Accept it. NOW. You cannot do anything about it so you might as well just throw in the proverbial towel and turn that love affair into a steamy menage-a-trois (foursome, even), and have fun messing with his mind while you’re at it  (A woman, liking football?! Motorsport?! What on earth?!).

This section of the blog aims to help you achieve just that–In no time at all, you shall be transformed into a confident, knowledgeable, self-sufficient, fantastic-female-football/motorsport-fan (try saying that ten times in a row) who will be able to march into any pub, club ground, track, heck, even a television studio, and discuss the ins-and-out of football and racing intensively and extensively.

Still with me? Good, because trust me, we are going to have so much fun.

Now, time for introductions. As your self-appointed instructor, I feel compelled to share my relatively brief but significantly fruitful, history with football & motorsport: First of all, I do not personally play the game, and while I do have a drivers’ license, it’s not in any way Super, therefore I am not allowed to race cars nor bikes. Yes, I am not ashamed to admit it– I am an Armchair Fan. Remember that term, for it is a rather useful and omnipresent term, especially in football:

Armchair fan– someone who does not play the game/sport but enjoys watching and supporting it. It can also pertain to a football fan who does not travel to go see his club play live and prefers to support them in the comfort of his/her living room.

You now have your very first ‘jargon’ sorted. However, this is not the last time you shall be encountering the aforementioned term, for it deserves dissecting in succeeding entries.

Moving on, I am still currently geographically-constrained from seeing my team and club from playing live, and to add to the agony, time-zone constraints also come into the picture, therefore, For the last 13 years, I have inevitably contracted chronic insomnia, canceled numerous social appointments, made some coffee farmers and manufacturers wealthy, and endured less-than-glowing-morning-after-complexions just so I can follow football matches on the telly/PC/laptop live. However, I have been fortunate enough to attend a couple of Formula One races in Asia–an experience that was unlike any other. If you ever accuse me of not loving football or motorsport enough, I shall personally make sure to reenact those Looney Tunes-moments when a massive anvil is about to fall on Wile E. Coyote’s head, only I’d replace him with you. I think that about establishes just how much I love those sports, no?

By the way, there will be no rigid nor linear structure as to how this ‘course’ will go on. What I write shall depend on what is on my mind at the moment, what matches or races I’ve recently seen, and what’s relevant and dominating the headlines. Also, there will be numerous analogies and anecdotes as to how football, wheels, and life with men are connected. I assure you, they are almost mutually exclusive that you’ll wonder why you yourself hasn’t realized them sooner.

That will do for now, I think. We shall begin the wonderful journey towards football and motorsport enlightenment with the succeeding entries. For the meantime, keep this thought with you at all times: “It’s Football, NOT Soccer.”

Hang on, that is another article altogether. 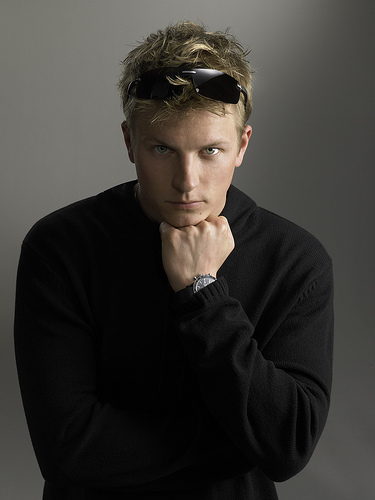 Exactly WHAT goes on in that stubborn, secretive, elusive pretty blonde head of yours?

You’re unbelievable, you know that?

There are very few men in this world who can make my heart race and palpitate faster than a Koenigsegg CC going downhill with its brakes cut off–and yes, you’re very well one of those chosen few. The chosen few who can affect me and my entire week with a single headline.

How very dare you play with the hearts of your supporters for a second year in a row? Just when we were already on the brink of full acceptance and are comfortable with the thought of you staying in WRC, you go and dangle the possibility of an F1 return? Why?! Why make us go through months of speculation, reading-between-lines of confusing and sometimes downright insulting pseudo-journalism in the hopes of finding a clue as to where you’ll be next season?

It’s bad enough that we have to contend with the challenges of our everyday lives, and now you’re forcing us to frantically press F5 or Refresh on our web browsers to check on any Breaking Motorsport News.

For your information, I was fully intent on boycotting Formula One next year, and by boycotting, I mean crossing it out of my Travel Calendar in favor of going to a MotoGP or World Superbikes race, because I’ll have you know that you’re not the only racer I follow, and it’s high time I give them more attention and priority than you, you icy blue-eyed Flying Finn. This talk of an F1 return is completely out of my plan–do you have any idea how much it will cost me to go to a MotoGP race and an F1 race in 1 year? Do excuse me for being a struggling architect and not a multi-millionaire lazeabout.

So, this alleged return of yours, are you really sure you want this? They say you have approached Renault about a seat, correct? To be fair to them, they seem to be vastly improving, race-per-race, not to mention of course, they were WDC and WCC in 2005 and 2006. Let’s just conveniently forget that certain scandal in Singapore circa 2008, which was the fault of a certain Mr. Briatore, anyway. You said you’d only come back to F1 if you can drive a competitive car, and can the Renault deliver that? There’s even talks that a Mercedes drive is another possibility, as Schumacher seems to be leaning towards a swift, and permanent exit from F1. So in order to see you back in F1, I must lose Schumi all over again? Why must that be so?

I have to say though, that the prospect of you driving alongside Robert Kubica is a rather tantalizing one–The Former WDC Flying Finn and the Grounded, Hardworking Pole is certainly a partnership to be scared of. I just pity the poor journos who will most certainly have a hard time extracting quotable quotes and controversial statements from you guys. Hey, you can even have Lady Gaga’s “Poker Face” as the unofficial team anthem if the partnership comes into fruition. See, I can still maintain humor in this time of confusion and sheer bewilderment.

To be completely honest, I don’t fully trust anything that the Renault bosses/PR team say at this point, at least not yet. The memory of that bungled McLaren deal at the end of the 2009 season is still a sore spot for me. I was so sure that you’d end up wearing the silver suit yet again, only to have my heart shattered in a million pieces when both camps announced that the deal fell through. The idea of Renault choosing Vitaly Petrov over you blows my mind, though. Actually, if they end up choosing him and not you for 2011, then it’s their loss. They can spout all the PR gloss all they want, but this time around, please make sure the team really wants you and will make the effort to listen to you and take care of you, not just a driver, nor a former WDC, but a respected individual. You deserve nothing less, Kimi. Never settle.

On the other hand, if you do decide to reject Formula One yet again (clutches pearls) and stay on in WRC, I will not be against it and will support you still. Yes, I will be hurt and I will curse the racing gods for a while, but don’t worry, for I shall survive. At least you will continue to be shielded from the prying eyes and ears of the ruthless F1 press and still be able to battle it out with Racing Heavyweights such as Sebastian Loeb and Mikko Hirvonen. Oh, and sorry to tell you this, but if you do stay in WRC, then you’ll only be joint-top favorite driver of mine, as I’ve already pledged my undying loyalty to Mikko Hirvonen in this racing series years ago. After all, who would have thought that you would transfer to WRC so early in your career? So you can’t blame me for being fond of the Finns, okay? After all, it was Marcus Gronholm who first got me into WRC.

If he stays in WRC, we’ll see more of Relaxed Kimi as opposed to Icy Kimi. Hmmm.

Please Kimi, spare me, nay, spare us, the long and excruciating wait this time around. You cannot rely on your Paul Newman-meets-Bambi boyish good looks forever in appeasing us when times get tough and the burden of the silly season looms in the horizon.

I don’t want to jinx it but if you come back to F1 in 2011, I promise to be a really, really good (albeit destitute) fan.

Hang on, why am I grovelling and making promises to you? You should be the one making up for my broken heart and the impending destruction of my bank account. See the power you have over me?

Damn you for being so awesome that I just lost an hour of my real life writing you this letter.

What the heck, you’re worth it. You’re totally and utterly worth the wait.